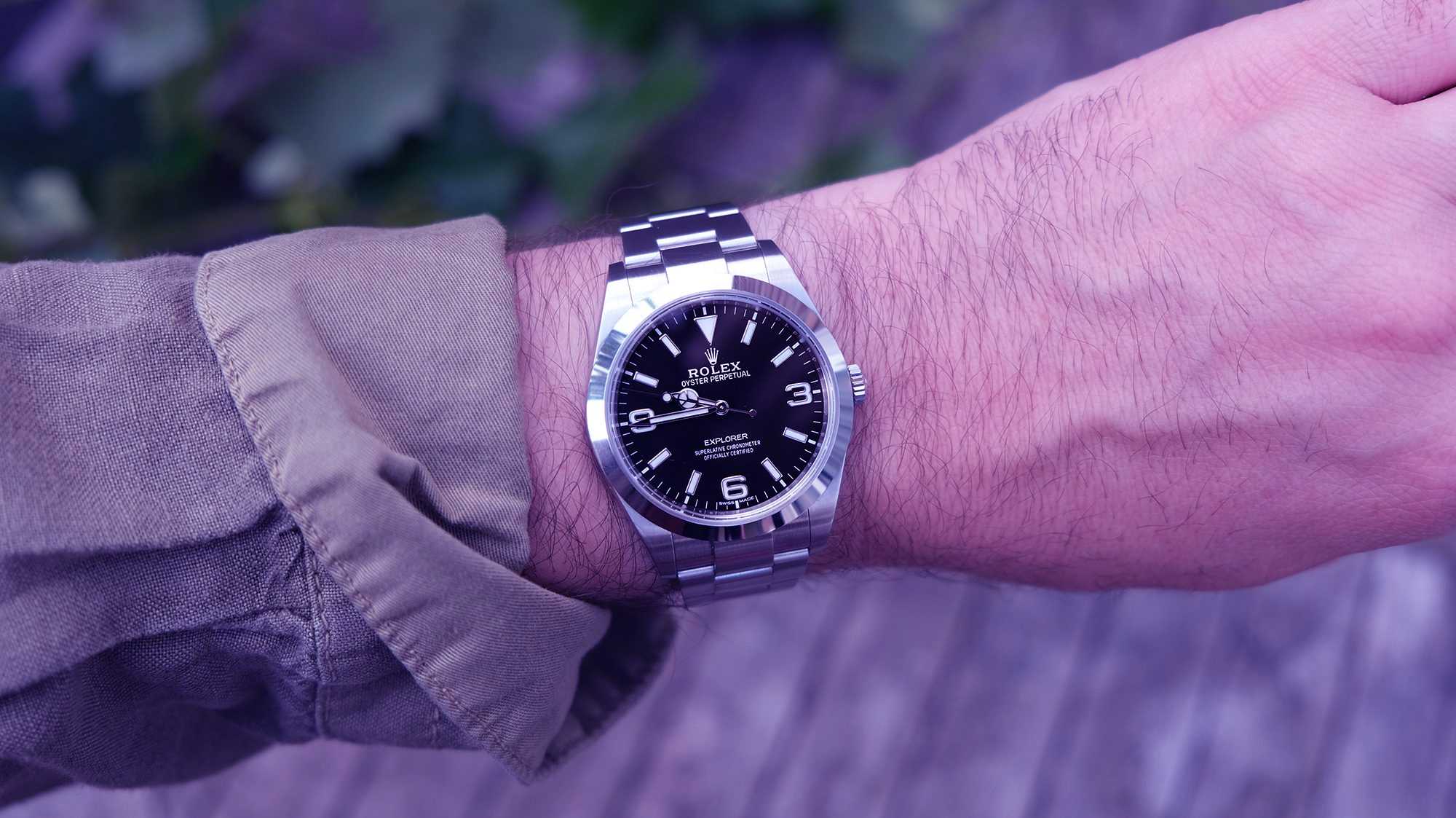 Rolex Explorers were worn by explorers and mountaineers attempting to summit Everest as early as the 1930s. Rolex designed the Explorer to commemorate Edmund Hilary and Tenzing Norgay’s summit of Mount Everest on May 29, 1953. Interestingly, although Rolex was the expedition’s official supplier, so was the English watch company Smith’s. It was designed for rough and tough use in temperatures ranging from -20°C to +40°C, and even higher, in snow, sleet, rain, sun, and high altitudes. It not only had to work in these harsh conditions, but it had to.

The original Ref. 214270 was released in 2010, replacing a smaller watch, the Ref. 114270. Though there were some variations to 1016 over the years, it was the longest-serving Rolex model. Rolex had been producing Explorer-style watches since the 1930s, and the famous Everest model was introduced in 1953, following the success of Hilary/Norgay.

The dial is the distinguishing feature of Rolex Explorer. It is always black, with a big luminous triangle marker at 12, bar indices for the hour markers, and Arabic numerals at 3, 6, and 9, shared by all Explorers. However, each is slightly different depending on the day’s trends.

When comparing the new and old 214270, the dials appear nearly identical. The main differences are the hands, which have been lengthened and made slightly larger. Many Rolex fans were unimpressed when the case was enlarged from 114270 to 214270 (36mm to 39mm), the enlarged dial stemmed in slightly too shorthands that did not quite reach the indices. This was an unusual look that resulted in what appeared to many to be an excess of negative space on the dial. This is addressed by the new 214270.

Also Read  Cycling Is Great For Your Health: Here's How to Enjoy It Safely

Rolex used Chromalight only on the bar hour markers and the triangle in the previous 214270. The Arabic numbers 3, 6, and 9 were left as polished steel appliqués. The polished steel appliqué on the 3, 6, and 9 Arabic numerals on the new Explorer also has Chromalight infills. Chromalight is a Rolex exclusive, though some sources claim it is also made by the same company that makes Superluminova. Instead of the usual green, its lume glows blue. The lume, according to Rolex, lasts longer than the standard SuperLuminova. Interestingly, the 14270 used tritium for its lume until around 1998, when legislation required a switch to a non-radioactive luminous material, which was Luminova. In 2000, a better version called SuperLuminova was introduced, which Rolex used until 2008 when it was replaced by Chromalight in all watches with lume.

The movement is a Rolex Caliber 3132 manufactured by Rolex. The movement cannot be examined from the back of the Explorer because it lacks a display case. We didn’t have the watch with us, so we couldn’t open it to inspect and photograph the movement. However, if you’re familiar with Rolex movements, you’ll notice that the 3132 is finished to a very high engineering standard, with attention to detail focused on ensuring a highly reliable, rugged, and high precision operation. Rolex movements are not typically finished with traditional decorative finishing. The 3132 has a Parachrom hairspring and Paraflex shock absorbers. All Rolex patented technology carries Rolex refinements, despite being loosely based on standard technology for hairsprings and shock absorbers.

The 3132 has passed COSC testing as well as the Rolex Superlative Chronometer standards, which require a more stringent +2/-2 second per day timing result after the movement has been cased.

Rolex owns the market for the ultimate tool watch. Some fans believe Rolex invented the space. Others might disagree. However, there is no denying that Rolex is the industry standard. So to speak, he was king of the hill. Rolex watches are all well-engineered. The level of industrialization is astounding. And the watches are unquestionable of the highest quality. Furthermore, no other watch compares to the resale value of a Rolex sports watch. This is a significant advantage for Rolex.

Also Read  Some of the Best Chick Flick Films Ever Made

What piques the user’s interest is Rolex Sports watches. Each is designed for a specific practical application that professionals in the field require. The Submariner and Sea-Dweller were designed to meet the needs of COMEX and professional divers. The GMT Master and GMT Master II were developed in response to commercial flight requirements, specifically those of Pan Am Airlines pilots. The first chronographs were designed for military flight timing, and later, the Cosmograph Daytona was designed for racing drivers to use to time their laps. The Explorers are meant for the use of adventurers and explorers all over the world. No other watch company can offer such a strong connection to professional use as a foundation for design. And no other watch company can match the resale value of a Rolex tool watch, which contributes to their collectability.

As a result, we’ve grown to adore the Explorer. The dial is stunning. The design is a study in clarity and legibility, with the use of Arabic numerals mixed with bar markers and the unmistakable inverted triangle at 12. As one would expect from a Rolex, the manufacturing quality is first-rate, and the Explorer does not disappoint. It is now considered a classic. It is truly an icon and a living legend. And we are impressed by Rolex’s ability to make only minor improvements to the Explorer, not even changing the Ref. number, but with improvements that are meaningful and worthwhile.